Thunder Laser has only one approved additive to mitigate freezing.

There has been much debate, experimentation, and documentation on the subject of water-cooled lasers with regards to the main cooling fluid and additive combinations. The theoretical, as well as practical, implementations and observations, vary from person to person and source to source. There exists a majority, however, of novices and seasoned pioneers in the laser community who concur on the best combination of fluids and additives for water-cooled glass tube CO2 lasers. In this article we will explore, in depth, all of the possibilities and why (or why not) to use them. I will also reveal the secret recipe for the most tested, highest-performing coolant solution!

It has been reported, and well documented, that an electrically conductive laser cooling system can and will become charged from the HVDC (High Voltage Direct Current) excitation, and resulting population inversion, of the gain medium in a glass tube co2 laser if conditions allow; even if all other peripheral electrical systems are functioning within normal parameters.

Electrical resistance shares some conceptual parallels with the notion of mechanical friction. The unit of electrical resistance is the ohm (Ω), while electrical conductance is measured in siemens (S). An object of uniform cross section has a resistance proportional to its resistivity and length and inversely proportional to its cross-sectional area. All materials show some resistance, except for superconductors, which have a resistance of zero. The resistance (R) of an object is defined as the ratio of voltage across it (V) to current through it (I), while the conductance (G) is the inverse:

For a wide variety of materials and conditions, V and I are directly proportional to each other, and therefore R and G are constant (although they can depend on other factors like temperature or strain). This proportionality is called Ohm's law, and materials that satisfy it are called ohmic materials.

Contamination can come in many forms. They can reside in the cooling system, fluids, and additives themselves and they can develop in the system over time.  It is vitally important that the system remains free of any foreign materials, organisms, or other contaminants.

The main (and often the only) ingredient in the cooling system for a watercooled laser should be water. Clean, pure, impurity-free water. Let's take a moment to familiarize ourselves with some commonly available sources of H2O. 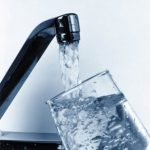 Tap water’s ability to corrode metal can vary considerably depending on its chemical composition. Chloride, for example, is commonly found in tap water and can be corrosive. Facility or tap water should not be used in liquid cooling loops if it contains more than 25 PPM of chloride.

The levels of calcium and magnesium in the water also need to be considered, since calcium and magnesium can form scale on metal surfaces and reduce the thermal performance of the components. More importantly, ordinary tap water has a conductivity of ~100µS/cm to ~1000µS/cm depending on the contaminants and additives present which is well above the threshold to allow (and even promote) arcing in the tube and allowing the cooling system to become energized.

As the name implies, DI water has an extremely low concentration of ions which imparts important performance attributes. Firstly it eliminates mineral deposits which block the coolant flow and degrade cooling efficiency. Secondly, it eliminates the risk of electrical arcing due to static charge build-up from the circulating coolant.

The lack of ions in DI water eliminates both of these problems. Deionized water has a conductivity of only ~0.05S/cm. Care must be exercised when using DI water. The very lack of ions also makes this coolant unusually corrosive. Called the "universal solvent," DI water is one of the most aggressive solvents known. In fact, to a varying degree, it will dissolve everything to which it is exposed. Therefore, all materials in the cooling loop must be corrosion-resistant and compatible with DI water. 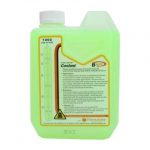 This line of products is intended for PC watercooling and does not take into account the high voltages and other factors present in CO2 laser tubes. many are deionized water or ethylene glycol-based. Some of these specialty fluids; whose brand names include Mayhems, Primochill, Koolance, Alphacool, and others; promise low conductivity (3µS/cm), low toxicity, thermally superior coolants with corrosion and biological inhibitors. They also promise to be very expensive with one product costing $130 for a 5 liter jug! We are not prepared to speculate either way on these coolants yet but they actually look very promising.

Sometimes there is a need for additives in the coolant to help it maintain the proper characteristics and performance in addition to any possible additives and contaminants that could already be introduced. Some are necessary at times and some are never a good idea. Any foreign component added to the cooling system, alone or in combination, can yield undesirable results such as a critical equipment failure, system degradation,  or even serious injury. Read on to learn more about the pros and cons of additives.

Antifreeze is a topic that gets brought up quite frequently and the information is often incorrect in part or in whole. Generally speaking, supplementing the coolant with antifreeze should be a last resort. There are a variety of ways that the coolant temperature can be maintained above freezing without the use of an additive. Many of these solutions fall under the umbrella of freshwater aquarium equipment. Thermostatically controlled electric tank heaters are one very popular solution and there are quite a few other remedies as well. If none of these solutions fit your situation then antifreeze can be implemented. Here is what you need to know. 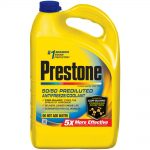 So ethylene glycol can absolutely short down a glass tube (as well as contaminate and degrade the cooling system) and is not recommended for any reason. Moreover, automotive antifreeze is formulated to be safe with vehicle cooling system components but has been reported to degrade nylon and silicone, among other materials, that are common in laser cooling systems.

For instance, nylon is hygroscopic and is moderately attacked by ethylene glycol causing swelling and eventual breakdown while also lowering resistance (and proportionally increasing conductivity). Although, this would only marginally affect overall conductivity since it is above tolerable limits already. The mechanical fatigue would be more concerning with nylon components than the abovementioned electrical characteristics.

RV antifreeze (propylene glycol) on the other hand has an undiluted conductivity of ~414µS/cm and, when diluted equally with distilled water, measures around 200µS/cm. This additive can possibly be used without incident and is recommended as a non-toxic, laser-safe solution to freezing if no other solutions are feasible. This mixture will tend to promote excessive algae growth so an algaecide will also be warranted. As always, it's better to regulate the temperature of your water with the methods listed at the top of this section.

NOTICE:  Since the publication of this article,  certain RV Antifreeze has been known to exceed the allowable level of conductivity! An aquarium heater in the reservoir is still the best method!

Additives are frequently needed to prevent organic growths in the cooling system. Some types of water as well as some additives are especially susceptible to algae growth which, left unchecked, will cause a variety of problems. 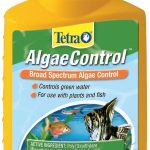 This product appears to be the go-to solution to combat algae and it has minimal effect on the overall conductivity of the cooling fluid. This is the product that I specify in my secret recipe later on in this article and it has worked very well for myself and many others. 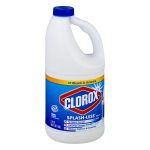 Testing has shown that  6 ml of Clorox with 5 gallons of water gets a conductivity reading in the neighborhood of 40µS/cm and this is a sufficient amount to inhibit the growth of bacteria and algae.

Sometimes detergents and surfactants are called for to provide the best possible conditioning and flow of the coolant. We will cover one great product and one that should never be introduced into a laser cooling system. 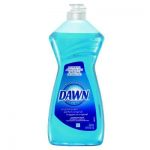 Original strength Dawn dish soap is both a detergent and a surfactant that appears to have very little effect on the conductivity of the cooling fluid at any reasonable concentration. Some research has shown that it is not remarkably effective at reducing or eliminating bubbles in the system although I have seen a very slight improvement in my systems.

Knowing just how powerful of a surfactant it is, coupled with the fact that conductivity is not negatively affected in any way, bolsters by reasons for using this additive. The detergence alone must offer some benefit and even if the reduction of air bubbles is not directly benefited I am certain (even without conducting tests) that the dramatic decrease in surface tension and friction must provide better performance. This additive will always get my vote. 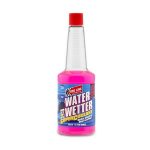 According to their website: "WaterWetter is a unique wetting agent for cooling systems which reduces coolant temperatures by as much as 30 degrees Farenheit. This liquid product can be used to provide rust and corrosion protection in plain water for racing engines, which provides much better heat transfer properties than glycol-based antifreeze."

While I am sure this is a great product for water-cooled internal combustion engine applications it is a horrible additive for lasers.  There are other similar products on the market like MoCool and others which, I'm sure, yield the same results.

Don K. had this to say about this product in his excellent write-up: "I tried adding "WaterWetter" @ 1oz. per 3 gallons. It raised the water conductivity from 4.0µS to 410µS making the coolant unacceptably conductive. The bad part is that it did not remove the bubbles much at all. WaterWetter measured without dilution is very conductive and reads infinity on my meter. Even after I rinsed a bottle that had the wetter in it and then added distilled water it raised the conductivity from 4.0µS to 40µS. The bottle suggests 1oz. per gallon so I was using only 1/3 the amount recommended for car cooling systems."

I think we can safely eliminate WaterWetter and similar additives from our laser coolant additive list!

Among the sources listed below are some of the "heavy hitters" in the chinese laser community and they have written superb articles from which I have garnered much of the content above. I think  HP Persson captured the essence of what I wanted to convey in summary on his site, k40laser.se, by saying:

Of course there are users who have cooled their laser with tap water, RV antifreeze, camel urine or whatever. Just because it works for them it isn't a rule to say it works for everyone. How fast a laser cooled with camel urine will fail depends on so much more than the coolant like power usage, how often and how long it´s used, room temperatures, lasing temps of the water and so on. The facts are there, you be the judge of how you want to cool your machine, I can only suggest what to do, or not to do.

I ran the following combination in my Cyclops K40 for 2 years with no growth, slime, build-up, discoloration, or arcing. When I disposed of the water it was in the same exact condition that is was on day one! Okay, enough already. Here is the secret recipe (This mixture is calculated for an unfilled tube and a 5 gallon reservoir):

Here are the sources which were referenced when compiling this article. I would like to give a big shout-out to Don K., HP Persson, Arthur Wolf, and everyone else who I have cited as well as all of those who lead (and follow) me on my journey through laser land :-).

Did you find it helpful? Yes No

Send feedback
Sorry we couldn't be helpful. Help us improve this article with your feedback.